This week's build can be seen here!

This week I tackled doing the highlighted tasks from last week. Nothing special! It does always surprise me how rusty I am on the code I myself created. It's been so long now since I started this project. The upside to taking this long is obviously that you can let decisions sit and see how they feel, but taking your sweet time definitely isn't *all* upside. That's its own lesson, I suppose. I have to start researching how I want to release this, so that I can start researching how I want to pay the people I'd like to get to provide art, sound, and programming support.

Oh, and as soon as I get another playtest in I'm taking out those impassable goals. They're just... annoying. And not that fun.

As always, the charging-up noise is by Javier Zumer. I use and modify it under this license.
Posted by Unknown at 11:39 AM No comments:

This week's new build is here!

This week I mostly... well, I was on vacation so I didn't do as much work on my blog as I could have with an entire week off. Still, I made a new level and added some functionality which really should have been there from the start. 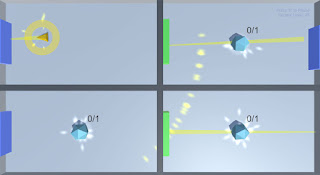 The new level isn't anything amazing, but it's a very tidy puzzle that walks you though three chambers slowly and then has you exit those chambers quickly to solve the single goal in the level. It's really easy, but it uses later mechanics like warp blocks, so I'm not sure where I should put it in the progression. 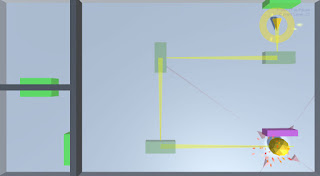 I also made it so that extendable lines (yours and your enemies') now follow boost plates. It only took a little while to do, and most of that was just reminding myself how I had the system working in the first place.

I spent some time trying to create a level involving a puzzle with a lot of steps. I scrapped it, but not before finding out that deactivating warp walls doesn't stop you from going through them, and wrap walls that are adjacent to obstructions still let you pop through them. I might work on fixing these bugs for next week.

Lastly, I still want user feedback on having goals be solid to prevent exploits, but I'm deciding that I don't like them. It's really annoying to me to have them be obstacles, and if it's annoying to me I assume it's double-annoying for players.

As always, the charging-up noise is by Javier Zumer. I use and modify the sound under this license.

I'm taking a week off to visit some family. While I'm there I'll totally have time to work on this blog, but I did kind of take *this* week of blog work off.
Posted by Unknown at 7:28 AM No comments:

This week's build is up HERE

This week I changed the way goals work... pretty fundamentally. I'm comfortable doing so because the changes are easy to undo, but as of now you can no longer simply move through goals and linked goal nodes. You can only pass through them by charging.

This finally prevents people from doing the types of shenanigans I mentioned earlier. Is it worth it? Well, that's what I intend to find out. On one hand, it feels more restrictive. On the other hand, it could allow for some cooler puzzles. I'll let it sit a few weeks, at least until the next time I can get playtesters on it, then I'll decide whether to keep it or not.

Side note: never forget the supporting details which make a thing feel substantial. I could have just changed the code to make sure you can only pass through goals while charging, but I also added what I needed to create a little effect when you bump into them, and to have them visually react to you beginning to charge so that you know you can charge through them:

And finally, as always, the charging-up noise is by Javier Zumer. I use and modify it under this license.
Posted by Unknown at 1:56 PM No comments:

This week's build is HERE

I'm a day late in uploading this, but it's the 4th of July weekend, so I think a little slack is due.

There are two current exploits that I'm having trouble eradicating. The first is the player's ability to bust through enemies with no effort if they happen to be very close to the enemy upon beginning their charge. I thought I had fixed that when I made enemies reposition the player upon deploying their shield. Turns out, my distance calculations forgot to include the width of the shield when deciding how far away to position the player. This meant that if you were close enough you could start your charge, the enemy would put its shield *through* you, and then you'd just charge anyway. So, I fixed that. I also corrected a behavior where the enemy was allowing players to intersect it while charging up. (as in, prior to releasing the charge). Fixed that too. You can still, however, manage to cheat if you put a wall just behind yourself when nudging up close to an enemy. The enemy will try to reposition you, fail, and then you just tear through it. Oh well.

The other exploit is that rapidly spinning players can destroy enemies by just spinning around a bunch. Because the mesh is basically triangular in shape, every corner reads as a hit. You basically turn yourself into a whirling-dervish-buzz-saw-shuriken of death. This, come to think of it, would be a cool idea for a game all of its own. For the time being, I need to think of a way to stop this from happening. No players have discovered this tactic so far, but if there's one that's for certain, it's that they will. Still considering making goals impassable unless you are releasing a charge.

Other than that, I edited levels. One level went away, and a level I forgot to add last week made it in. I think it was this one: 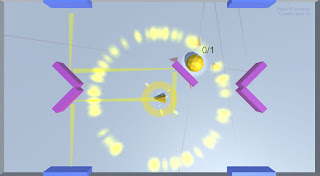 I originally had two enemies in this level, but that was waaay too hard. This is much better. The walls here are actually really fun to traverse, so expect to see another few levels in this configuration at some point.

As always, the charging-up noise is by Javier Zumer and I modify it and use it under this license.