After about a month of various trips, from San Francisco to Boston to Milwaukee, I'm finally back to posting! It's been a long, long time. When I last left off, I was in the middle of trying to find a way to make it easier for players to make a series of quick charges while still giving them the time they need to accurately line up shots. I wanted the charge meter to fill up, pause, then fill some more, pause, and then finish filling. I'm not sure why this stumped me for so long, because I sat down with it for a few minutes today and just got it working:


(to see the solution, check out the build right here)

After I got that working, I felt like the game was too sluggish. I increased the rate at which the player's charge meter filled and tried it again. I also decided to test a hypothesis that I had. Previously, if the player smashes into a wall, they're stuck charging until the charge runs out. It felt like an appropriate cost for what is a very powerful ability. But what if that was wrong? Because the missed shot is itself a failure, and because the charge is the main mechanic of the game, perhaps it's wrong to punish the player in this way. My hypothesis was that having your charge immediately end upon smashing into a wall would not only allow players more leeway in quickly charging across levels, but would make the game more fun to play overall without sacrificing the integrity of puzzles. Then I made a build for that mode of play:

My guess is that, while the three-step charge is cool, it's a little over-complex. The simpler solution of removing wall-stuns from the game is probably the best way to do things. Even if it's less cool from a UI perspective.

All this fiddling with the charge mechanic is very unkind to my friend, who is working on the sound effects for that charge. So for now, the sound effect is still by Javier Zumer, which I am modifying and reusing under this license
Posted by Unknown at 8:53 PM No comments:

Investigating how the player charges

I did a lot of non-game work this week and weekend, so unfortunately there's no build this week. I am looking into some feedback I recently got from some playtesters. I was glad to see that the game has gotten a lot easier to control, and people seem to be getting close to finishing the game in one sitting comfortably.

While I'm managing difficulty fairly well, I could be doing better. There are later levels in the game which, while not too difficult puzzle-wise, are pretty difficult execution-wise, which causes a difficulty spike that I didn't factor in.

I'd love to make it easier for players to charge multiple times in quick succession. I think I want to revise how the player's charge attack builds up and lets off to address that. This also means changing how the force is applied to the player during that charge. I think these changes will actually involve me removing some over-complicated systems, so this might make the game more stable, actually.

There's also a bug I've been getting since updating Unity where the linked goal nodes in just one level won't always fire properly. That's going to vex me for a bit.

Oh! And next week is GDC, so I will probably miss the next two weeks of updates!
Posted by Unknown at 9:02 PM No comments:

Back to the Blog

It's been a while! The new build is right here

Sorry for being out of commission for so long. My computer was out of commission for a little bit a few weeks back and I haven't really been on the ball about doing Unity work since then. To be honest, I'm really considering moving on to the next project for this blog. I'll still work on Pierce of course, I want to release it eventually. But for the purposes of this blog, I really need to be doing something useful each week. And that hasn't been true for a while. I want to use this blog to experiment more, so at the end of this month, after I'm back from the Game Developer's Conference, I'll try to work more on tutorials and experiments.

Not much changes with this build - I fixed three minor bugs, one of which came up as I updated to a new Unity Version. There seems to be another unity bug happening on certain levels. I'll see if I can get it to happen more reliably and fix that bug as well. 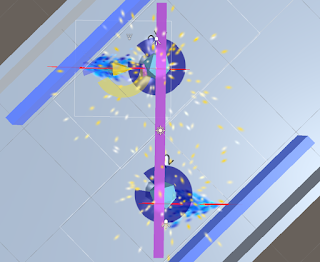 The audio designer I have helping me is still working on new sound effects for charging, but for now the charge-up noise is still by Javier Zumer. I use and modify this asset under this license.
Posted by Unknown at 10:25 PM No comments:

I'm still working at learning shaders. I'm not sure how I'll be able to use them in the game, but likely there will be some kind of application. Maybe a spotlight effect under the player that gets more pronounced the more you charge up your attack. In the meantime, I learned how to do this:

Posted by Unknown at 7:11 PM No comments:

This week I only had a little bit of time to work on the game. I spent some of that time putting together a list of all the sound effects in the game and where they appear in the project to give over to a friend of mine who is interested in producing some sound effects for me. The rest of the time I spent refreshing myself on what I'd already covered in terms of shader tutorials so far. So, not much forward movement this week. Next week will hopefully be better.
Posted by Unknown at 8:36 PM No comments:

I worked very hard on a design test that's part of Wizards of the Coast's "Great Designer Search 3." I definitely didn't procrastinate at all and I'm definitely not just writing this now, at midnight on Sunday.

With seriousness, I apologize for not posting anything this week. If only to talk about the shader tutorials I'm doing, I plan to resume next week.
Posted by Unknown at 9:57 PM No comments:

This week I got in touch with a friend of mine who was interested in providing sound effects for the game. I'm going to provide them with a list of sound effects that need to be either created or replaced. At the top of that list is going to be the sound effect I keep having to cite each week. Sheesh.

I also continued my slow progress with learning shaders.
Posted by Unknown at 9:10 PM No comments: