Just a small update this week. I mostly just built a level that forces players to navigate a maze. It appears within the first few levels of the game so that more people will realize that they can move about without charging everywhere they go. It was the number one issue with the game in the last playtest, so it's important that this level properly communicate to the player.

That being said, I ended up pulling back a bit on how directly I spoke with the player here. I created an object that reveals text as you charge. Once charging reveals the first bit of text, you really want to see the entire message. But when you reveal the last bit, you see that the message actually is trying to teach you NOT to charge. It's a little playful this way, and even though it seems counterintuitive, I think the way it asks the player to charge to reveal its text actually makes its message more effective. Here's what it looks like:

The problem is that I don't want to test this system without first testing the level without this tutorial text. If the level on its own teaches people what I want them to learn, then I don't want to introduce tutorial text into the mix. There's an outside chance I can make this game without any tutorial at all (outside of the instructions menu).

Next week I'm going to continue to revise the beginning of the game. Specifically, I want to see if I can introduce switches and kill walls way earlier.

As always, the charging-up noise is by Javier Zumer. I use and modify it under this license.

EDIT: Whoops! I actually left that tutorial feature in, and I wasn't unsubscribing from events correctly, which causes a huge bug! Fixed that now. And I figured I'd leave the tutorial feature in.
Posted by Unknown at 6:30 AM No comments:

Sorry all, I had company over this weekend. I had planned to have an update ready before Friday, but I wasn't able to get to it. More updates to come.
Posted by Unknown at 8:58 PM No comments:

I'm still acting on a bunch of feedback I got from the indie city games. I reworked half of one level and all of another level. 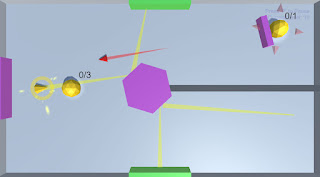 This is the same "hexagonal bouncy shape" level as before, only now instead of two linked goal nodes on the right-hand side, there's an enemy. This way you use the hexagon to solve both halves of the level. I missed the two linked goal nodes though, so I redid the next level to look like this: 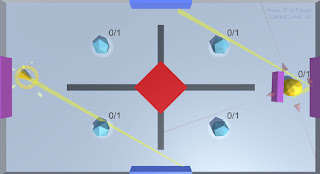 At first, it didn't have the enemy on the right-hand side, but the level felt too simple, and I wanted the player to sort of be led to how to use the bounce and warp plates in the level. With the enemy, you're guided to traverse the level in a certain way. It's even possible to clear all the linked goal nodes and the enemy in one attack, which is neat.

As always, charge-up noise is by Javier Zumer. I'm using and modifying that noise under this license.

Posted by Unknown at 5:52 PM No comments: