If everything I did this week worked out, you should notice nothing different between this week's build and the previous build...

That's because this week I tackled upgrading to Unity 5.5, which broke some things, and exposed some existing problems with some other things.

For starters, I use a convex mesh collider for the player object in this game. Without using the new "Inflate Mesh" setting on the mesh collider component, physics would do some very odd things which make some levels consistently difficult to complete. Charges would go sideways, player objects would get stuck in walls, etc. 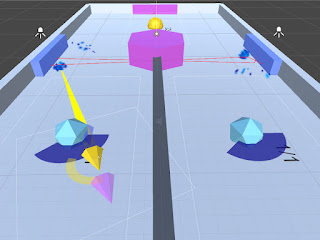 Once I found that setting, those problems were solved, but new problems arose. Boost plates, which have always quickly parented the player to them and then un-parented the player, no longer consistently worked. You're not supposed to parent a moving non-kinemtatic rigidbody to something else anyway, so I was surprised that this worked the first time around. I had actually completely forgotten that I was doing this. Now boost plates just set your position to their position whenever you enter them - which is not the best way to do it, but it will work for now.

Other than that, I fiddled with changing how the player charges. You know, just because I hadn't messed with enough core features of the game for one week. I didn't end up liking any of my changes, but they gave me an idea for how to tweak the strength of the current charge system.

Charging-up noise is by Javier Zumer. Usage and modification under this license.
Posted by Unknown at 8:49 PM No comments:

(This week's build can be found here!)

This week I got some great player feedback, both from friends online and from friends in person. I have several notes on specific things I'd like to try to change in certain levels, but the biggest takeaway by far is that people generally don't play this game with the W,A,S and D keys to move. They just rely on the charge for movement. One thing I want to do for next week is change the game so that it teaches WASD movement earlier on. This is something I actually had planned to do anyway, so I have some ideas on how to do that.

I received and acted on some feedback that the enemy shields should appear as you charge up your attack, not just while the player is lunging forward. I agreed immediately and wondered why I had ever made it work that way in the first place. As it turns out, I didn't want to (or maybe didn't know how to at the time) have to tell the enemy's shield when to move and when not to move.

There are some other changes I made this week as well, but they're relatively minor. See if you can notice them!

As always, charge-up noise is by Javier Zumer. I use and modify this asset under this license.
Posted by Unknown at 10:03 PM No comments:

Not a lot to say about the newest build. I was sick this week, which should have given me plenty of time to work on this blog, only I didn't realize that until after I had gone back to work.

I've only made a few small changes this week:


That last one is pretty important, since I would love it if I could get more feedback on this game, and I think it would help if people could tell me what level they gave up on / what level was really tough for them. So keep it in mind when you're playing! Look right up here:

And note what the number of the level is. Then feel free to contact me on twitter @JacobDMooney to let me know where something was frustrating or boring.

For next week, I want to prototype a bit of a tutorial for the game. And maybe I'll put in some placeholder background music.

As always, the charging-up noise is by Javier Zumer and I'm using and modifying it under this license.
Posted by Unknown at 4:29 PM No comments:

This week I didn't do much: just deleted an old level and replaced it with one that accomplishes more, more cleanly 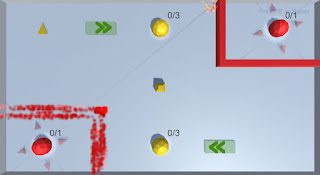 The idea here is to creatively use the boost plates to kill the enemies. The switch makes it so you can only clear one enemy at a time. It's within line of effect of the enemies too, when they're not behind their walls. This means that the enemies can sometimes flip the switch themselves. This was all sort of interesting, but not very compelling. It was always a little aggravating that the switch placed in the middle actually obstructed you if you wanted to get from one side of the level to the other without flipping the walls on/off. It was a poor level to use to introduce the concept of switches. 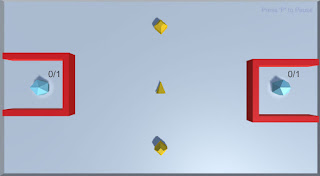 Extremely simple and very different from every other level in the game. Each switch opens one of the inward-facing walls. Once both have been hit, you can easily hit each linked goal node. This level closely resembles the level which came before it, which is a strength when trying to introduce a new concept. It also forces the player to utilize the new concept multiple times in quick succession. It's a much better level to use for introducing the concept of switches. Even if it is less exciting.

As always, charging-up noise is by Javier Zumer. Use and modification under this license.
Posted by Unknown at 2:06 PM No comments: