Sorry, no new build this week, though for the sake of whoever might be looking to play, here's a link to the most recent build of the game.

This week I was busier than usual, and decided not to work on the game until after the Indie City Games meetup, which occurs every two months or so. At the meetup, I showed off the game and got a few people to try playing. I immediately observed some things, and learned even more when they were done playing and I got to interview them:

1)  I need to tutorialize harder. People don't know that you can use WASD to move. I'll need for the game to detect whether you're using a controller or not, so I can have the game mention the analog stick if it is relevant.

2) This level is absolutely too difficult: 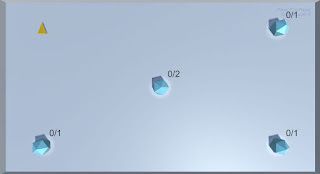 3) For the second meetup in a row, people kept mentioning how rewarding it feels when all the goals disappear together. They love the levels when you can solve everything in one go. One person told me they wanted the linked goal nodes to disappear as soon as they cleared all of them, instead of waiting for the timer to run down. I think the lesson here is that hitting a target cleanly is an inherently joyful activity. I mean, we've known this for years - it's why headshots exist - I've just never thought of it that way for this game.

4) This level is intriguing: 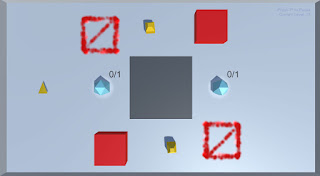 There is no one clean solution to this level. I just thought having switches and kill walls in this configuration would be interesting. It seems I was right, because more than one person called it out as being particularly fun or as making them feel clever. I'll have to try to recreate this type of level.

5) There seems to be a bug involving enemy shields and pressing and holding Mouse 0 (left click) while you are mid-charge. This is a bug I'll have to look into for next week.

And that's it! For next week I'll be acting on all this information, prioritizing the parts I've written in red text.

And, as always, in the build linked above the charging-up noise is by Javier Zumer. I use and modify it under this license.

Moving up the Movement

New build for this week is up here!

Making a post early this week since I'll be away over the weekend. This week I added, changed, or moved 4 levels. Here are two of them: 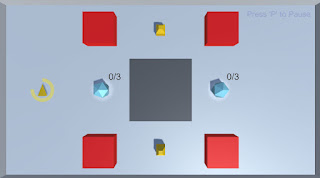 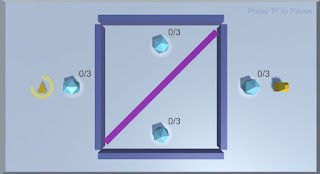 I made these changes primarily to extend the period of time that I'm teaching linked goals / bounce walls and also so that I can introduce movement much sooner into the game.

I'm not yet sure how I feel about the top level pictured above. It's a little loose - there's a lot of ways to solve the level, and you don't need to interact with anything to solve it. However, in every case, it feels like you have to be either quick, clever, or both to hit both linked goal nodes in time. I guess that's good enough. Plus, if Zelda is anything to go by, it doesn't matter if the player is solving things the "right" way as long as the player feels like they are solving things "their" way.

Charging-up noise is by Javier Zumer. I use and modify it under this license.
Posted by Unknown at 9:04 PM No comments:

You can play the new build here!

This week I've added two levels: one that looks almost exactly like the level that comes before it, and one that's all-new. Both of these took several revisions, and will probably be revised one or two more times at some point. 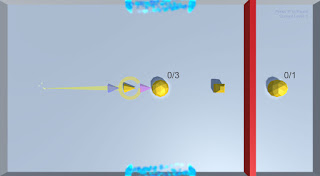 I'm in the process of figuring out what should be taught to the player at what times. Up til now, Wrap walls, multi-hit-goals, and linked goals got front billing, followed closely by bounce walls. But switches, kill walls, and hitting moving objects are arguably more important than some of those. For now, I've made kill walls and switches introduced much, much earlier.

I want to put moving objects sometime after linked goals... maybe before bounce walls, maybe after. That restructuring will happen sometime next week.

Charging-up noise is by Javier Zumer. I use and modify it under this license.
Posted by Unknown at 4:17 PM No comments:

Sorry, no post this week! I attended GDC instead of working on my blog. In my defense, GDC is pretty awesome.
Posted by Unknown at 10:59 PM No comments: