This week I added a bit of polish (like... the kind you put on a linoleum floor or on a prized trophy... not the type of sausage) on what I submitted last week. Just a few hours working on audio and visual tweaks to get the goal-triggering and the charging to look a bit better and give a better feedback to the player. Check it out here!

Charge-up noise is courtesy of Javier Zumer under this license.
Posted by Unknown at 9:26 PM No comments:

Just the tiniest bit of progress

My requirement right now is that I post something, anything, each week. This week I managed to get this going, in between moving shenanigans and spending a lot of time with some great people (at Bit Bash, no less!)
Posted by Unknown at 9:47 PM No comments:

I briefly considered entering a hiatus for this blog until I was situated in my new job, but I decided that, whatever small amount of work I get done each week, I want to publish it here. 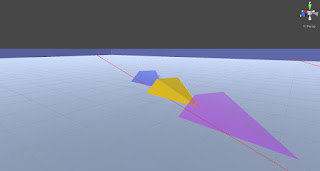 What I did this week is really something that I did many, many months ago. I had a game I was working on that involved being able to charge into walls which wrapped you around the level and into walls which bounce you against them. 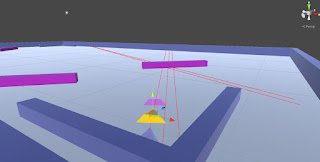 I could tell it was fun, but I couldn't tell what I wanted to do with the idea. Hopefully over the next few weeks I can figure that out.
Posted by Unknown at 10:46 PM No comments:

Well, Revolver is done finally - it looks and plays like a one-week game, but it took three due again to how weird my free time is getting this month. 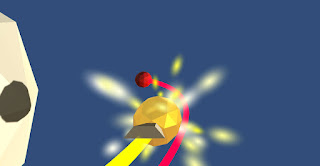 To be honest, I wish Revolver could have turned out better. I still feel like it's really lacking something, and I wasn't able to really find out what that was. For that reason, I wasn't really excited while working on it, and I think it shows. There are some surprising things you can do with the way the shooting is set up, enough to the point where I do think you could make a much larger game out of this. 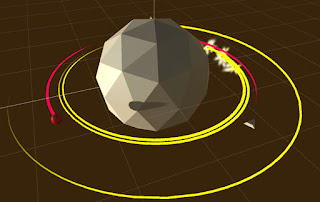 I didn't try it here, but I wanted to know what it would feel like if you didn't charge your shots, but they naturally got larger and stronger the longer you kept them alive. The size-to-damage-and-speed relationship was also interesting. A game where bullets and enemies could survive contact with whatever they hit, but shrink and lose size/damage but gain speed might be something to look into. 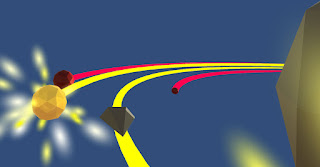 This three-week development cycle is another thing to maybe look into. I did maybe 1-2 hrs of work a week on Revolver, if that... but if I had the normal 5-7 I could try tackling larger projects. Something to think about. I could also take the fourth week off and think of ideas for future games, while actually playing games myself (Outside of Destiny and Hearthstone, I've forgotten what that feels like!)

Anyway, yeah - play Revolver here! Despite my self-criticism, it's still worth the two minutes of play.

Laser charge sound is by Javier Zumer, and is being used under this license

In-game background music is "Buildy" by p0ss, and is being used under this license
Posted by Unknown at 2:04 PM No comments:

Revolver at the Barest of Bones

Hi all! True to my word, here's my post for the week. I'm still really taxed by other things going on right now, in addition to really wanting to spend as much time socializing with all the people I'll be saying goodbye to in just a few short weeks! That being said, I did just manage to get Revolver to a 100% playable state. Go ahead and play it here!

Yup, there's no HUD or sound, but it is all there and playable. Next week will be sound, UI, and polishing the feel of the game (Off the top of my head, enemies could move a lot faster towards you).

As it turns out, the idea of having a shmup revolve around a central planet is pretty cool! (Though I guess Resogun sort of already proves that.) Organizing a shmup into three discrete lanes, however, isn't a very good idea, I think. A lot more interaction was lost than I thought would be. In fact, I might remove the lanes altogether for next week! If I have time...
Posted by Unknown at 3:47 PM No comments: