(Want to skip to the game? By my guest!)

I'm also really conscious of where Bolt fails. I've never made a racing game before, and I had this quirky idea for how to organize it so that I didn't have to code any "real cars" or anything: 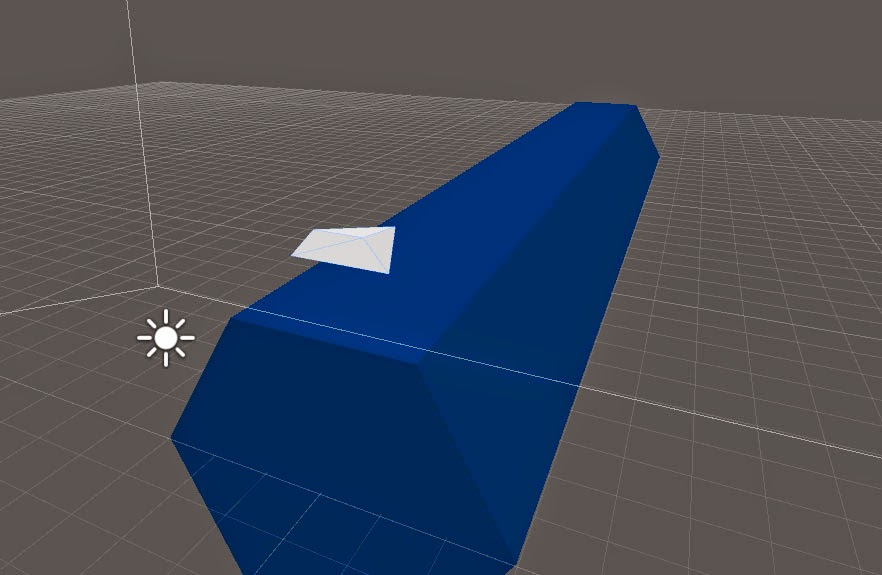 If I always had the player "attached" to one of these hexagonal prisms, well then I would be able to attach them to a specific face of that prism. And if every prism knew which prism followed, you could make a linked list of prisms. And when you got to the end of one prism, I could have the player warp to the beginning of the next prism: 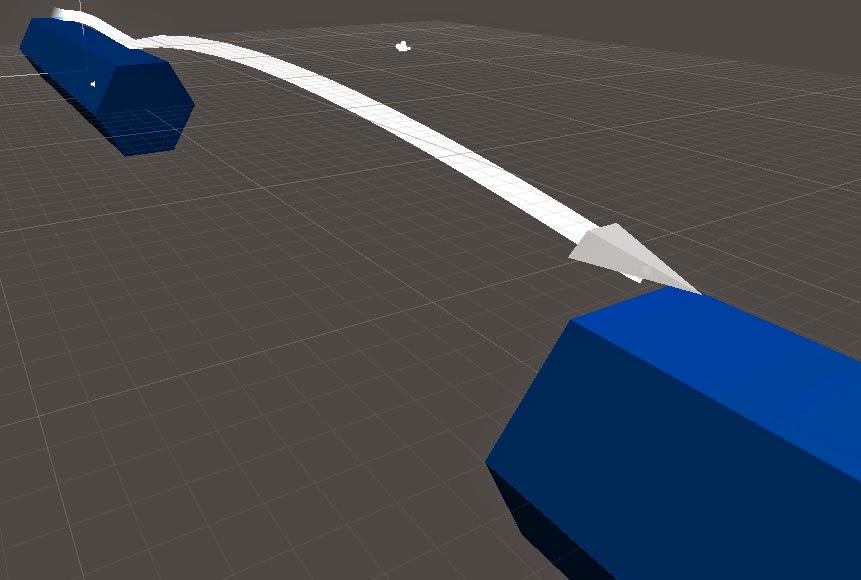 Link a bunch of prisms together and boom! Instant racetrack. It was a pretty simple concept that I immediately succeeded in complicating: 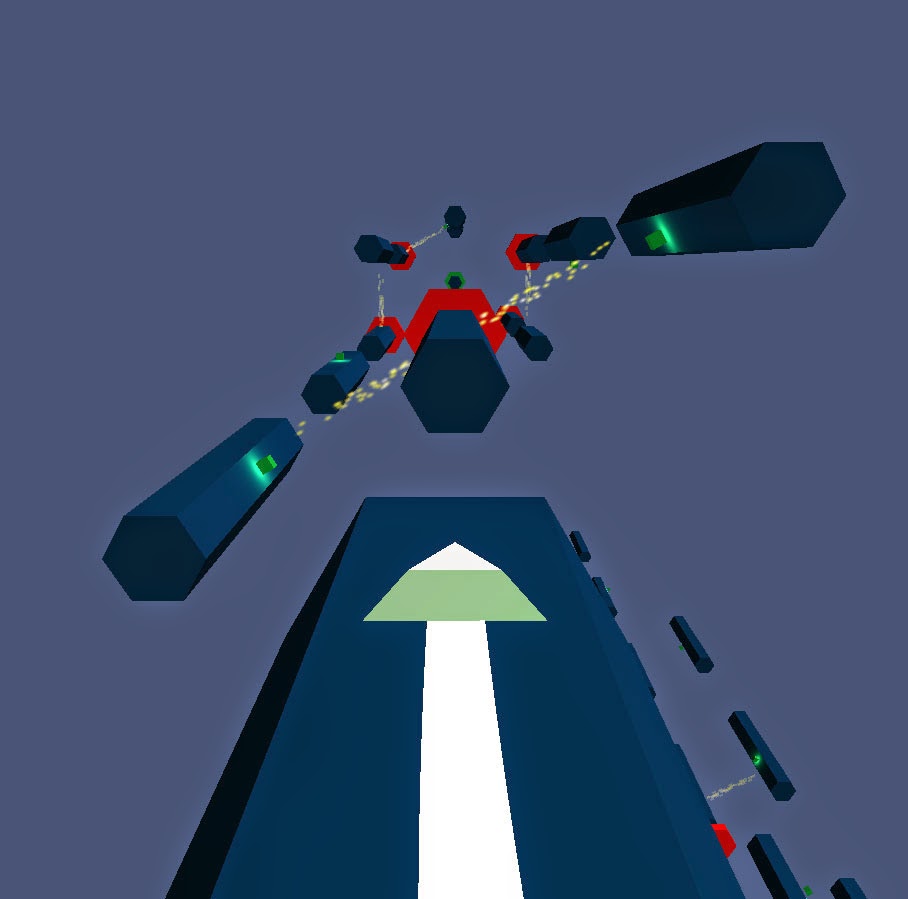 Bolt is an interesting concept, but a pretty shallow racing game, I think you'll agree. I really only scratched the surface with what kinds of races I can make with these building blocks, and I really only scratched the surface of what's actually fun about this kind of racing game. You have no control over acceleration or braking, so it's all about having a rhythm of boosts to hit. That really only clicked partway through development. I'd like to add multiplayer, and an actual tutorial, since the instructions might be difficult to follow the first time around.

But man, if I were to grade my Game-A-Weeks on how cool my screenshots look? A+: 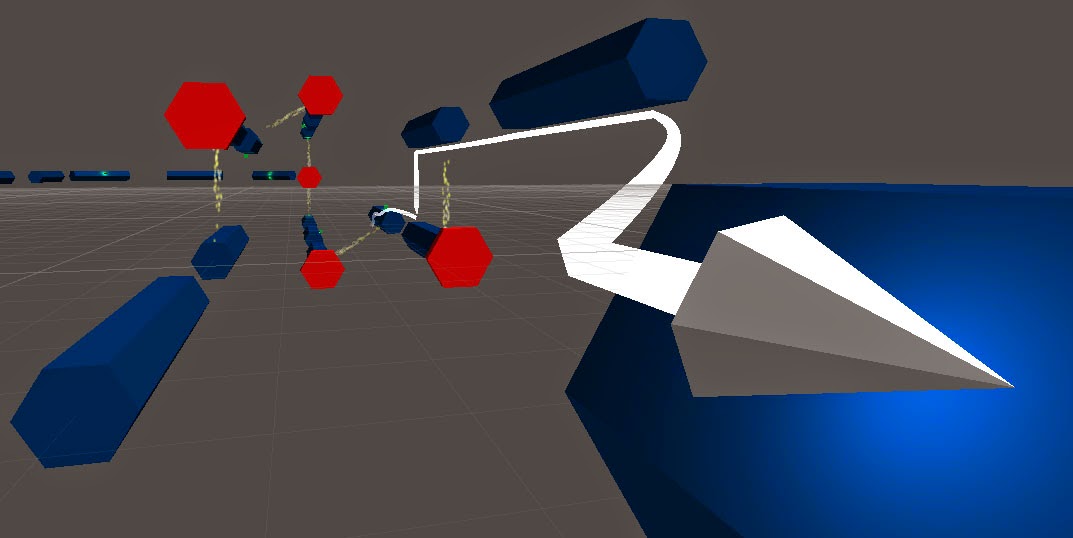 You can find the game right here

Menu Music is by Bart, in-game music is by RevampedPRO, usage under this license.
Main Menu typeface is "Hetilica" by Diego Quintana.

Posted by Unknown at 6:29 PM No comments:

(Inchworm can be played right here) 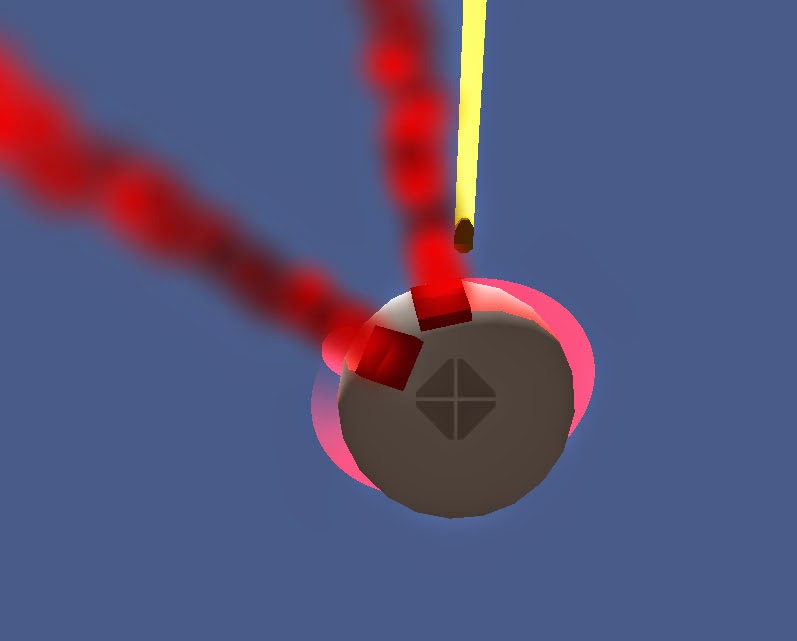 This is another really quick submission. Because I was sick for most of the week, I didn't have much time to finish this game up. Still, this is a nice kernel of a game that could really work. I didn't have time to fine tune the spawning system like I usually do, and I would really have liked some more time to experiment with more camera controls, but I'm reasonably satisfied with what I did in something like 5-7 hours.

The main menu music is by sonartuning, and the game music is by Avgvst. Both are being used under this license.
Posted by Unknown at 7:59 PM No comments:

(Want to skip to the game? be my guest!)

Originally, I was going to call this Sling Box, but that's already a thing. So is Chuck Box, so here's Cube Chuck! 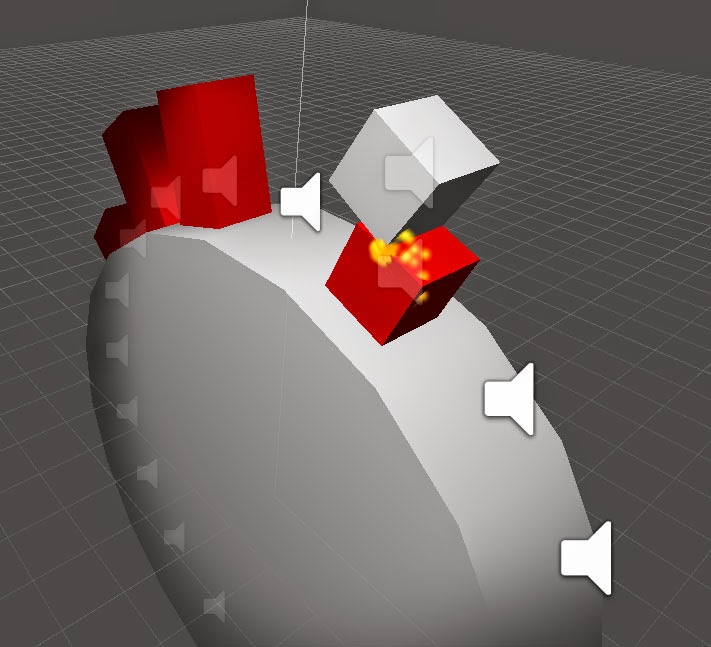 To be fair, this is definitely a smaller offering than some of my other game-a-weeks, but I did have less time than I usually have - I also wanted to experiment a bit with this odd idea I had for an infinite level, where the game world is a cylinder that keeps rotating.

There's not much of a hook to Cube Chuck, but I think it's a little deeper than it seems at first glance. I got really excited when I realized I could have the player move the cube left and right with rigidbody.addTorque (which always results in some weird behaviors). And once I had this cube bouncing and spinning around, it sort of became a bit charming. I immediately had to add the sparks effect and the little plinks to every collision (stealing a bit from Chibi Robo). 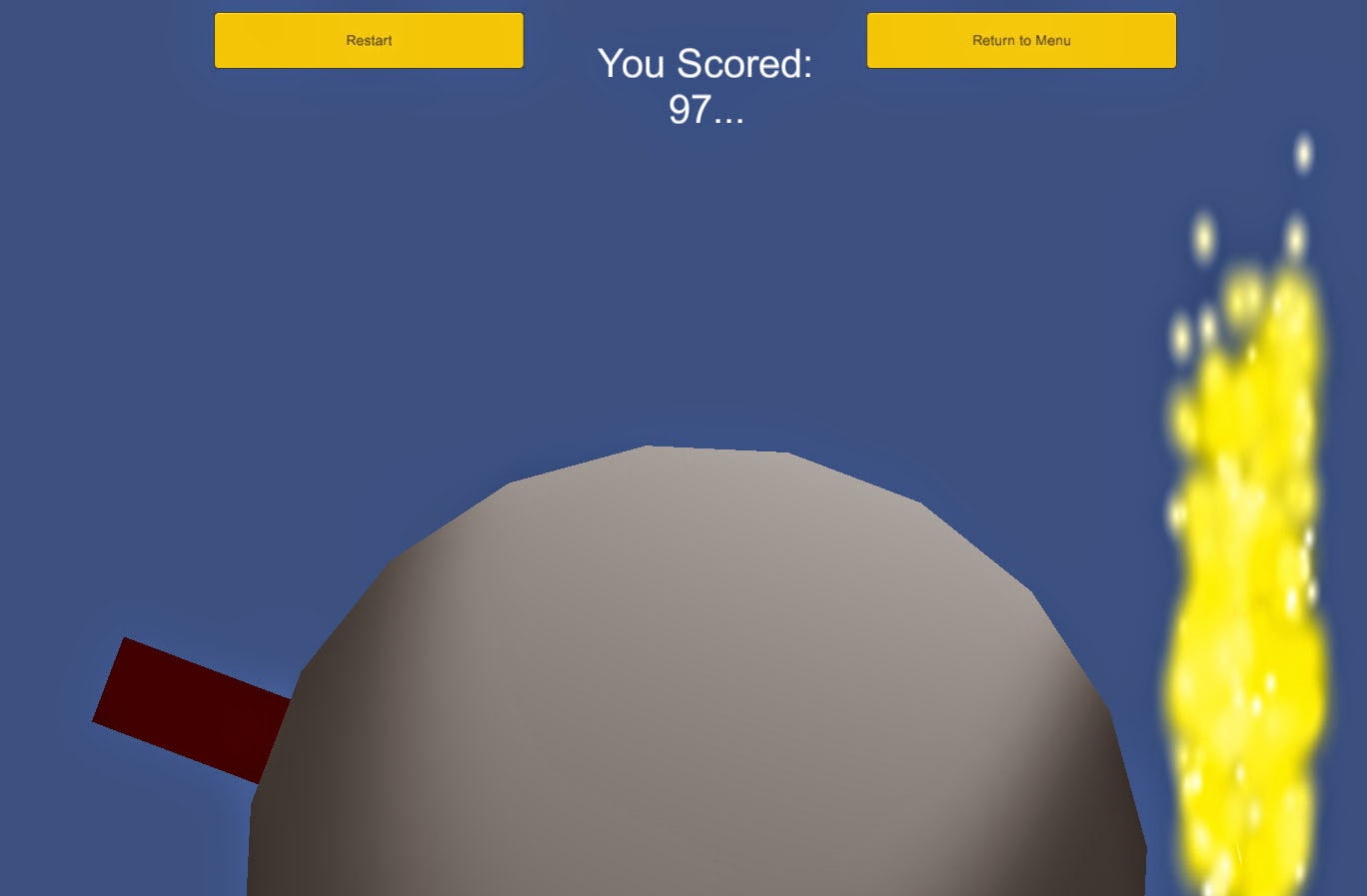 I also took the opportunity to steal the death effect from Super Smash Bros.

And here is a link to the game!

Posted by Unknown at 3:02 PM No comments:

(Want to just skip to the game? By my guest!)

This week's game is called Shoot the Moons! Convert the Sun... Shoot the Moon.. maybe next week I'll do another "<Insert Verb> the <Insert Celestial Body>."

But really, this week's game came out very well. I got started early, and I knew that whatever I did I wanted to do most of my movement with rigidbodies and addforce. I usually make movement like this, but I'd been using transform movement almost exclusively so far in my weekly games. I had an idea of a game where you're simply shot forward at an increasing velocity, and you have to dodge larger or smaller asteroids that pass by. If you were moving fast enough, you could smash right through certain-sized obstacles.

Well, instead of that, I made this: 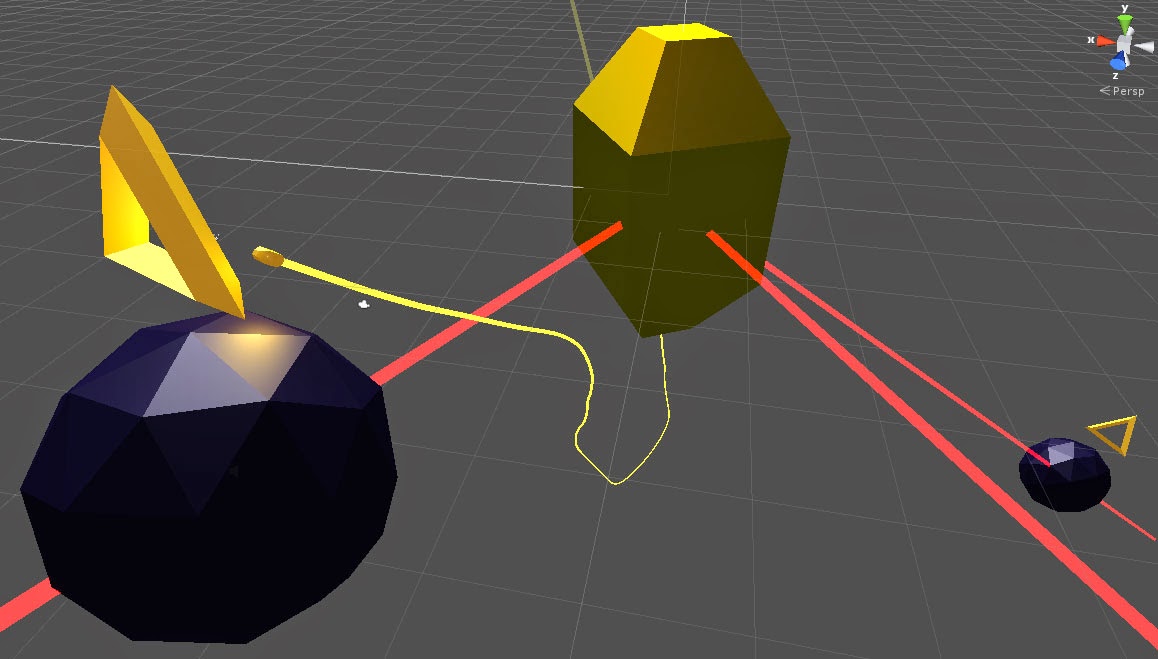 Once I had movement working, I really enjoyed moving all around in every direction. I gave the player a long trail renderer so that you could tell where you were going and where you'd been (and also, because I think I'm addicted to them) and for a while, I amused myself with just flying about: 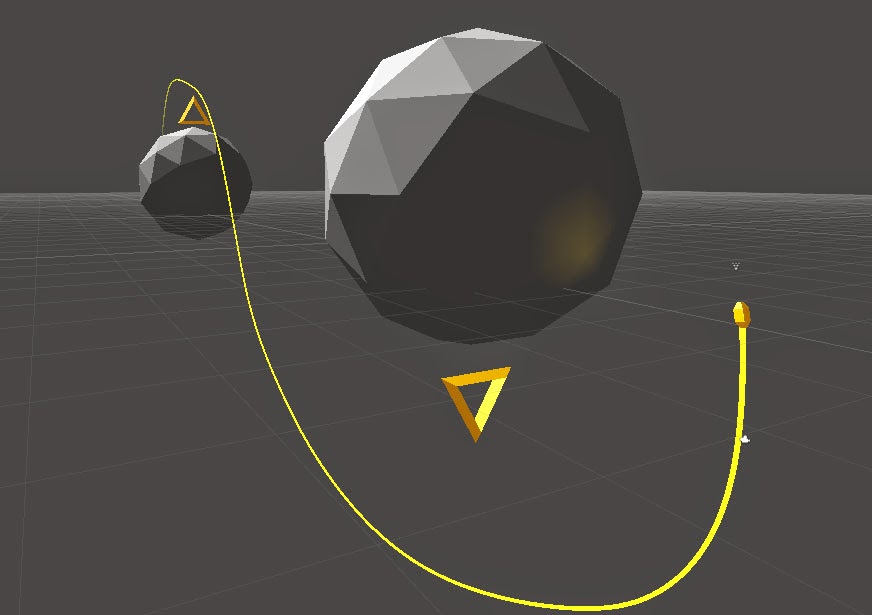 I had some trouble figuring out how I'd make this into a game though. The most interesting thing about flying around was, of course, nearly crashing into things. I made these triangles and placed them near other obstacles to try to encourage that. Then I went back to my original idea, and realized that I could just make the asteroids all have these triangles attached to them. After that, it was just a matter of framing the conflict around these incoming asteroids.

Last thing to note: I'm really happy with how the look of this game ended up. White, blue, and yellow were a good color scheme, and the triangular tori (just learned that word) really complemented the triangular faces of the hedron-spheres. Here are two more pictues I shot in full-screen: 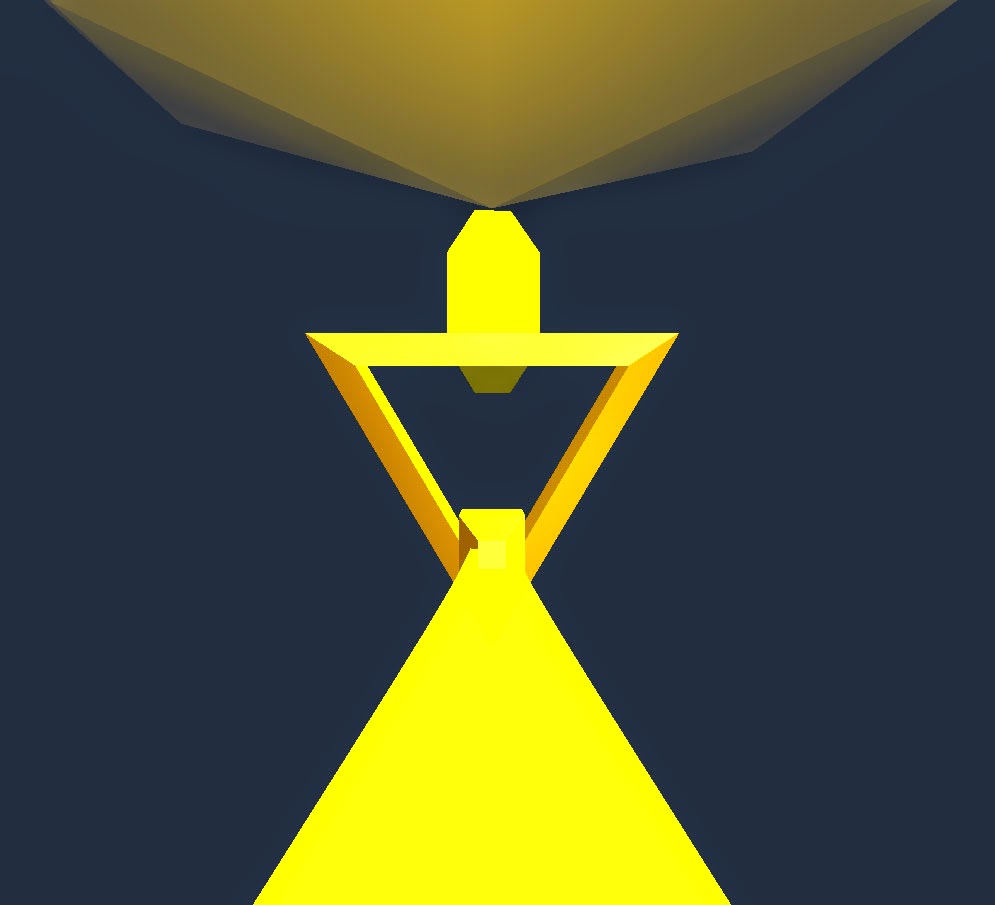 The game is available right here!

Oh, last LAST thing to note: Two things I may change if I get the chance before Monday are 1) Sometimes you don't boost when you hit space and 2) The line drawn from enemies to the core should really grow redder as they get closer.

And one MORE thing: I'd be completely remiss if I didn't mention that the triangle pickup noise was by NenadSimic, the menu music was by SouljahdeShiva, and the in-game music was by p0ss. They're all being used under this license

Posted by Unknown at 2:36 PM No comments: