So I missed my post last week - whoops! I basically didn't do anything over Christmas weekend except make it so that only the linked goal you are interacting with responds to linked goal node hits.

This week I cut out all levels that involved timers (plus one or two others that just weren't exciting me). I was basically only using timers to make different walls appear and disappear, and while that was interesting, the levels they produced didn't really pull their weight. This is sort of counter-intuitive, since this game is mostly about timing your charges correctly. But even the one timer-based level that I didn't want to cut was improved by removing the timed walls and turning them all into moving walls. 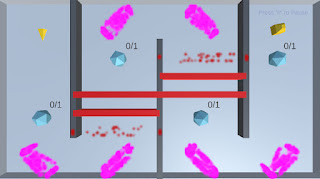 Above you can see the old level. The player has to navigate six timed kill walls. It's fairly easy to get to the switch on the right-hand side, then charge through all the activated bounce walls to hit all the goal nodes. There's a single specific moment when all the kill walls are down. Wait for that moment, then charge. 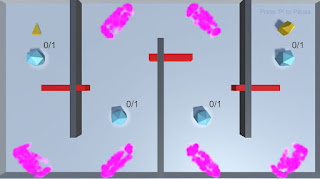 And here we have the new level, which uses three moving kill walls. The player has to interact with the kill walls in every corridor, though the far right and the far left corridors are the easiest to pass. Once you've hit the switch, you have to be mindful of where each kill wall is. You also need to account for how long your charge is going to take. The two center corridors are the trickiest to time when charging through the goal nodes.

If I had to guess, I'd say that movement is a more effective way to introduce timing-related challenges because it relies on visual information. Humans are probably just naturally better at movement-tracking than they are at internalizing an arbitrary rhythm disassociated from music.

Charging-up sound effect is by Javier Zumer. Use and Modification under this license.
Posted by Unknown at 9:25 AM No comments:

This week I deleted this level: 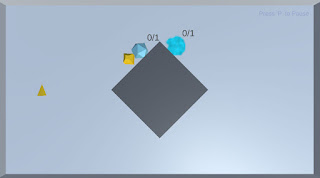 and created this level in its place: 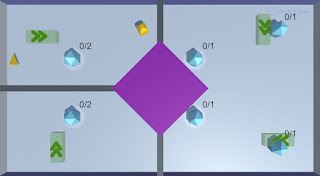 The new level uses boost plates (which I think I'm not using often enough), multiple sets of linked goals (which I've never done before), and linked goals that must each be hit more than once (which I'm doing only one other place).

It's also another level that is broken up int multiple chambers. I think the chambers progress kind of cleverly here, with the first puzzle showing the player how to hit the switch to reveal the next chamber. The puzzle in the next chamber is an elaboration of the first puzzle, using all the same boost plates, which feels elegant. I could make the level use three chambers, but this is already kind of crazy.

In comparison, the old level did a neat thing where it made the player think of their charge as not one instantaneous action, but instead a sequence of events. It's a cool idea, but not enough for an entire level.

Also, all linked goals are subscribed to the delegate which fires whenever *any* linked goal node is touched. This means that the "you've failed" sound effect and particle effect will play for all linked goals in a scene, even if you weren't interacting with it. I'll fix that for next week.

Charging up noise, as always, is by Javier Zumer. Used and modified under this license.
Posted by Unknown at 9:39 PM No comments:

In short, this week I deleted this level: 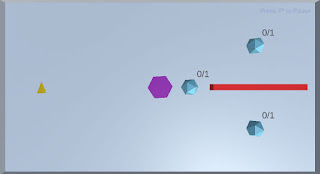 And added this level: 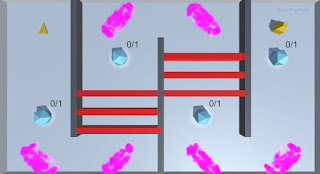 The top level is really just a poorer version of the level that comes right after it (the one with the large hexagon). It also looks really... weak. There's not a great amount of balance here and the entire left side of the level is underused. So I got rid of it.

I added the lower level because I realized that the game ramps up to the second to last level (the crazy one with all the walls and projectiles) way too quickly, and I wanted an intermediary level that introduces the idea of the level having passable sections. I was tired of having a switch that you didn't want to accidentally hit twice, so I just made switches able to be turned off and on. This means switches can turn off other switches, and switches can turn off themselves. Very meta.

I also did some behind the scenes fidgeting with the second-to-last level, increasing the interval between projectiles to dull the difficulty a bit. I played around with the order of another level. See if you can notice which.

Charge-up noise by Javier Zumer. Use and modification under this license.
Posted by Unknown at 9:36 PM No comments:

(New build is up here)

This week was spent fixing some existing levels. Most noticeably, I edited that new level from last week, taking out the enemies and the warp walls and making it a very simple introduction to switches. Here's what it looked like last week: 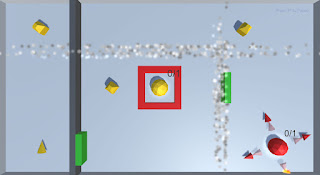 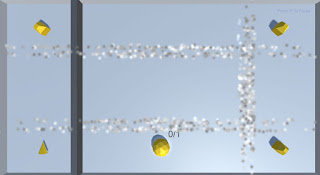 As before, you deactivate one wall and reactivate another whenever you hit any of the switches. This means that, one switch at a time, this level sends you in a circle (well, I guess in this case a rectangle) until you hit the goal at the bottom of the screen. As before, only one switch is ever accessible to the player at a time, so even though this may still look complex, it's probably the second simplest level in the game.

The other level I changed this week was this one: 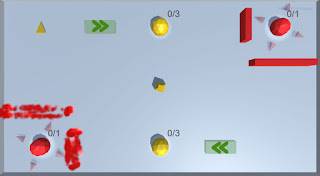 I moved the switch to the center from the bottom right corner because I hated the feel of trying to line up the correct approach to the lower boost pad and needing to be careful not to re-hit the switch. I also have the kill walls at the bottom left starting out deactivated. This means that when you hit the switch, one side turns on, while the other side turns off. This makes the level feel a lot more interesting, since you might have to hit the switch twice to complete it, depending on how you want to solve the puzzle.

For next week, I plan to take a look at timer levels, and see if I might want to remove them. On one hand, I can create any timer-related puzzle with enemy projectile launchers and swiches. On the other hand, timing is a large part of the puzzle-solving of this game, and I don't want to always have to worry about whether a switch is in range of some random enemy, or whether the player can mess up the sequence of timed objects...

Well, despite not doing much this week, it looks like I managed to write a lot. Just how it goes, some times. Charge-up noise, as always, is by Javier Zumer. Used and modified under this license.
Posted by Unknown at 9:21 AM No comments: