This week's update is a big one. Play it here!

So I tried to make up for not posting last week by doing a whole bunch this week. I worked on new levels at the beginning of the week, but then on Saturday took the game to a playtest and got a lot of great feedback, which prompted me to make the following tweaks:

Remember way back when I decided to make the player rotate instantaneously upon charging? It felt like such a good idea at the time... too bad it allows players to quickly click their way through a lot of obstacles. Three-hit goal in your way? Just click it three times and you'll clear it no problem, no need to interact with warp walls. I decided to leave things that way and see if it really ruined things and, yeah, it does seem to mess things up. You can also simply run left-right-left over goals and clear them that way. To fix that, I set the default timer for these goals to be shorter. Now you should be able to clear them a bit harder. Pro tip though: If you spin your mouse around the player while holding down mouse click, you become a whirling dervish, registering hit collisions many times a second, and mowing down all goals in your path! Sigh... Maybe I should just make goals impossible to move through unless you're charging? Could be interesting.

I made a few new levels: 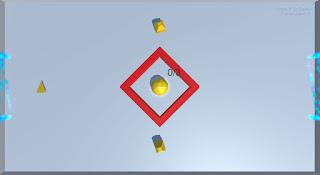 The above level preps the player for this one, which is an old one: 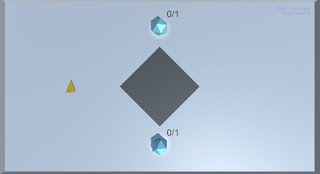 I'm trying to get better at transitions between levels. I find the key is to have the player seeing and doing things in the earlier level which resemble things they will see and do in the next level (which is really obvious in retrospect). That's why I transition out of the section on quick, small charges by using this level: 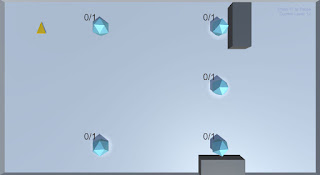 To go into this level (again, an old one): 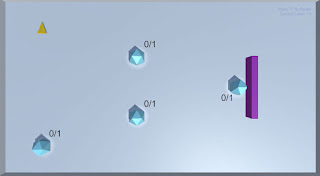 It's not exactly the same, but in both you start and stop in similar places, having hit several linked notes along the way. One level is square, while the other is triangular.

I also added the following levels: 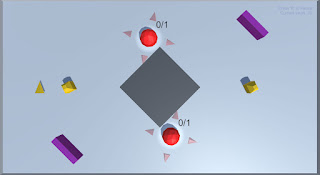 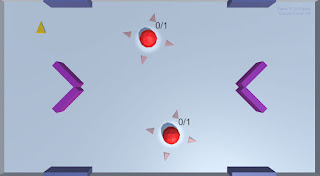 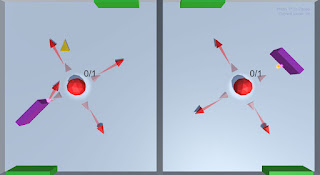 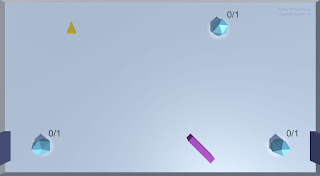 And I made tweaks to the following: 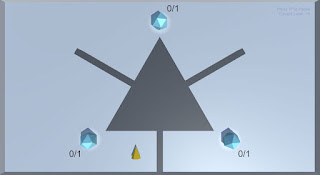 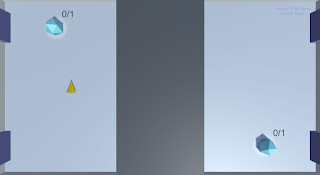 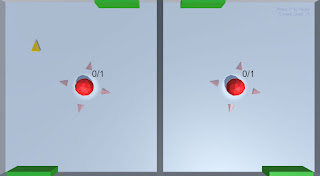 I know this game must have potential... I'm still thinking of ways to combine the features I have into surprising new levels. For now though, I think I've posted enough.

Charging-up noise is, as always, by Javier Zumer and I use and modify it using this license.
Posted by Unknown at 10:17 PM No comments:

Sorry, no update this week. I got distracted. I am, however, taking a close look at how I'm transitioning from teaching one concept to teaching another concept. As always, having the preceding level (containing mechanics the player is already used to) foreshadow the goal or form of the proceeding level (containing mechanics the player is no to) is like giving the player a stepladder to understanding. So I'm trying to make my transitions better through that.
Posted by Unknown at 8:15 PM No comments:

Following some of the notes I was mentioning last week, I've slowed down the time it takes to reach a full charge when holding left-click. I've also sized-up the meter that surrounds the player as they build up their charge. 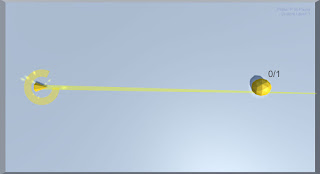 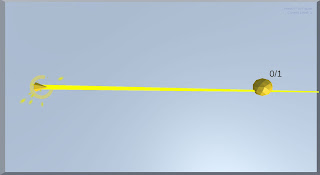 The visual change to the meter is just my hope to bring attention to how the meter can be half-full and still allow charging. Slowing down the meter, however, actually changes the game feel drastically different. It's much, much easier to do quarter, half, and three-quarter charges now. In fact, maybe I should make levels that specifically ask you to do those... Hmm..

Speaking of making levels, I'm looking at what the levels currently look like, and I'm unhappy again with how I'm distributing mechanics. I can use more movement, more switches, more kill walls. I can't, however, get too used to the game and forget that I need to introduce things slowly...

Charge-up noise is by Javier Zumer. I use and modify this asset under this license.
Posted by Unknown at 9:02 PM No comments:

This week I fixed some issues caused by the change I made last week. This means that the speed dampening I'm doing now works when you have the mouse button held down, and the speed dampening doesn't screw up your charge if you charge while standing still.

Additionally, several failure menus were totally disconnected and did nothing when you hit the buttons for retrying the level or returning to the menu... Those are now fixed.

I created a new level, which looks like this: 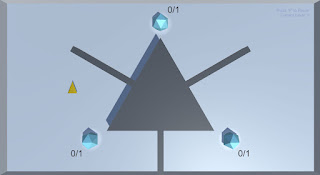 I needed a triangular level which forced players to do something uncomfortable: to start charges which aren't fully charged. (Man, I'm really being punished for giving players a charge attack that you have to charge up). You can't solve this puzzle by making full charges. At least some of them need to be quick charges that are just aimed in the right direction. It's an important skill to have in the game, and I notice that literally no players ever feel comfortable doing this. Partly, this is due to the penalization of being stunned upon hitting a wall. Something I hope to communicate with this level is that that penalty scales with how long you hold the charge for. Another reason why it felt uncomfortable is because of how slidey the controls felt, which have obviously changed. One thing I'm thinking of doing in the future is making it take more time to charge up your charge (there it is again) so that it becomes more apparent that you can release the meter prematurely.

I deleted an old level, specifically this one: 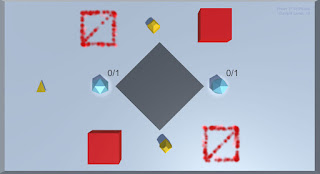 I also changed a level from this: 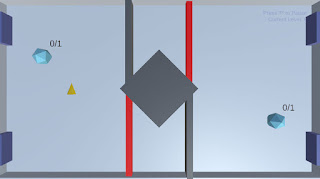 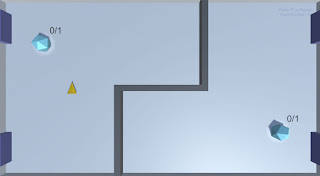 The kill walls were... overkill for a level this early into the game (by level, this is about a third of the way into the game, but by time it's probably more like a fourth) so I removed them. Then I just had to reposition the center obstacles. This level is another reason why I created the triangular level above. This level requires a quick charge through a blue wall to get one node followed by another charge (or just moving quickly) to get to the second node. Players have no idea that they can do quick charges, so this was frustrating too.

As always the charging-up sound is by Javier Zumer. I use and modify this sound under this license.
Posted by Unknown at 7:43 AM No comments: