This week's build is available here!

The biggest change I made this week actually took very little time: I made it far easier to move with precision:

I tried to just have the player move via transform.translate whenever it wasn't charging, which did not work at all. From there, I started digging in to the movement code I had written, and I realized that a previous fix that I had attempted had not worked (or had seemed not to work) because of how the movement code interacted with the turning code. I'm never certain if these movement updates will finally make the game feel less frustrating to play, but I hope to get positive feedback on this change.

Other than that, I tested out the effects of having moving objects stop their movement while the player is charging. The result is that certain timing based puzzles are ruined, and even the ones which are improved become kind of boring to solve. Maybe that's the right level of challenge, but that's not how I want to get there. So I undid that change and instead slowed down some of the more problematic timing puzzles. I also implemented something I had been meaning to do for a while: allowing moving objects to pause at each point they move to. It's not used a lot, but where it is used it makes things slightly more player-friendly.

I experimented with placing spotlight over places on the level where it is helpful to stand. It might have worked, except Unity's lighting ignores some lights if they are too close to other lights, and all goals are already spotlit, so that causes a placement problem. I could probably just mark all spotlights as "important" but I feel there must be a better way to get the effect I want.

As always, the "charging up" noise is by Javier Zumer. I use and modify it under this license.

Posted by Unknown at 1:49 PM No comments:

This week's build is up here

This week I didn't have much time to work on the blog, but I did have enough time to change the cursor. The goal in changing the cursor is to simply bring people's attention to it and help them visualize where they will end up going. I at first thought I would just go about changing how the cursor displays itself on the screen. I thought perhaps I could change it to something like this: 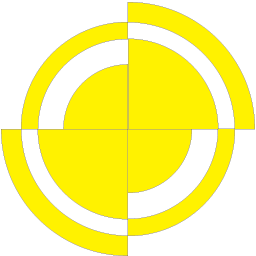 I don't know what I was thinking. I guess I wanted something that looked like a bulls-eye but not so boring. Anyway, I needed a way to make sure that the new cursor reverted back to a normal mouse cursor while over certain UI elements. That wasn't hard to do, but I didn't want to go through all the UI elements in the game (including the ones that appear attached to objects like goals and the player object itself) and flag each one for the cursor to recognize or ignore.

I also wanted to have the cursor react a bit to mouse placement. At the very least, I wanted the cursor to be like an arrow indicating what direction the player would be moving once they released their charge. That's when I realized the player object itself is an arrow and remembered I can just have an object in the level move about according to mouse movement:

Still not the best, but much better.


As always, the charge-up noise is by Javier Zumer and is being used and modified under this license.
Posted by Unknown at 4:24 PM No comments: