A New Level And Some Rearrangements

Not much time spent on the game this week, but getting back on the wagon always takes me a few weeks. I wanted the player to play around with switches and linked goals a little bit longer before introducing them to bounce walls, so I made a new level that uses movement, linked goals, and kill walls. I also did some minor rearrangement of levels. I think I may have deleted a level? It's late at night and I'm not sure anymore. 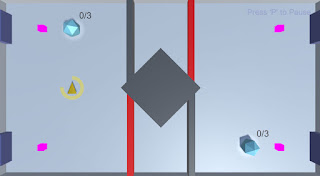 I've been thinking a lot about one piece of feedback from the last playtest I had. Someone wanted to be able to see what the optimal number of charges was for the level they were playing. I really want to be able to reward players for solving the puzzles in the lowest number of charges... I was also thinking about the issue I have where players can simply charge back and forth to clear any goals that require three or fewer hits. I realized that if I limit the number of charges a player has in a level, I increase the difficulty of the game, I increase the chances that people will stumble upon WASD movement, and I inform players of the optimum number of charges while preventing the exploit I mentioned above. However, I would need to clearly communicate the limit that's being imposed on the player, and I would be forcing people to restart levels a lot when they run out of charges. It would both frustrate the player and interrupt their flow, if they had any. I think what I want to do is call out to the player what the "Par" is for the level they are on, like a golf course. Maybe the win screen can inform players of how many charges they solved the level in, and how many charges you can solve the level in. This doesn't prevent people from doing anything, it keeps the game as difficult as it is, but it allows players to more easily seek the "perfect" solution, if that's the kind of gameplay that appeals to them.

Well, enough rambling. The charge-up noise is by Javier Zumer. I use and modify it under this license.
Posted by Unknown at 9:49 PM No comments:

Sorry, I didn't get much work done this week, though I feel like I should have. One thing I looked at this week was limiting the player's ability to rapidly charge back and forth. This was problematic because it meant players could easily bypass all "hit this goal three times" if they focused on just charging three times. I thought of a couple of unsatisfying ways that might have worked as solutions, but eventually I decided that it's not worth fixing. It only comes up three or four times in the entire game, and it's pretty clear that you need to be pretty familiar with the game already to pull it off...

I still want to look into restructuring levels this upcoming week. I've almost finished pushing the exciting bits (movement, switches, kill walls) so it's important to fill in some space with new levels. I'm not sure if I have a greater strategy for what I'm doing right now other than that the game feel better with these concepts frontloaded before the second (and eventually, third) wall types are introduced. Wall types can be combined with existing wall types and all these other concepts to start making very very complex levels, so I should have a good breadth of complexity to draw from now, instead of just killing time before I get to the next basic concept I need to communicate.
Posted by Unknown at 9:46 PM No comments:

Rearranging the Start of the Game

This week's build is available here!

So I wasn't so happy with the maze-like levels I had in the build previous to now. They were certainly cool, and I could make them impossible to complete without using WASD to move... but I didn't like how different those levels looked compared to the other starter levels. When players move on to a new level they have to understand what they're looking at, and when you make a level look very similar to the level that came before, players only need to worry about understanding the differences, which is helpful when you're trying to make it easy for players to learn something new. So I've changed the starting levels (well, levels 3-7) so that they look like this: 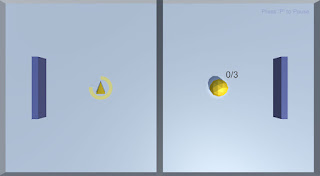 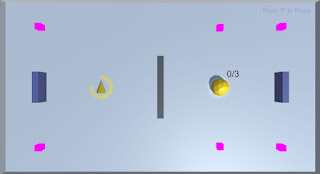 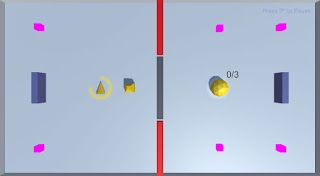 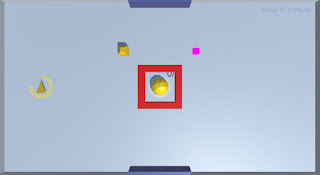 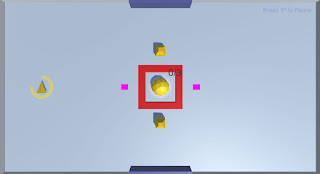 The first picture is level three. Goals and blue walls have already been taught by then. Level three introduces normal walls and getting around them with blue walls. The only difference here is that the level goes horizontally now, like levels 1 and 2.

Level four and five would be the maze levels, where I encourage players to use WASD, then require them to use WASD by introducing kill walls and switches. I decided that one way to teach WASD is to show the player that other things can move. The hope is that when players see other things moving, they'll wonder if they can move too (without charging). Moving obstacles also deserve to be introduced earlier in the game. You still can't solve level four easily without using WASD, and level five still introduces kill walls and switches.

Level six and seven are about expanding knowledge of switches and testing the player on all the things taught so far. For some reason I had these levels go vertical again. I'll probably leave it since these testing levels should feel different from the teaching levels.

That's all for this week. Again, the charging-up noise is by Javier Zumer, and I use and modify it under this license.
Posted by Unknown at 8:25 AM No comments:

Just some minor adjustments for now

Here's the new build for this week!

Nothing much to report this week. I wish I had done more work on the game, but it didn't shake out that way. I did, however, address the issues I highlighted in red last week. I was very pleased to fix that charging bug, since I was able to fix the issue by editing down my code. And having the player automatically look in the direction they wish to go when they charge is a very small but very satisfying change. It just feels right. Also, it lowers the "gulf of execution" by a bit. A very important bit.

Additionally, I rewrote that tutorial text I mentioned a few weeks ago. Now it says this: 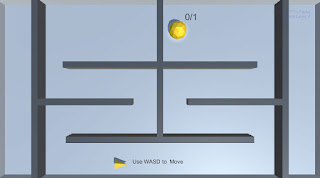 I still hate telling the player to do something when it's the only thing you ever speak to the player about. Maybe I should work on a more robust tutorial system that I can bring up in more levels. That way it doesn't stick out like a sore thumb when I use it here. Again, I'm hoping it's a little charming in the way that it appears word by word as you perform charges.

Finally, I played around in BFXR to see if I could finally replace the sound effect I keep citing at the end of these posts. I was not successful, as evidenced by the below:

Charging-up noise is by Javier Zumer. I use and modify it under this license.
Posted by Unknown at 8:10 PM No comments: