Whoo boy, I wish I had started this before Friday. You'll definitely be able to see that there are a lot of places where some extra love could have benefited this game. Like adding level boundaries. Or better handling what happens to your character when it flies into a wall: 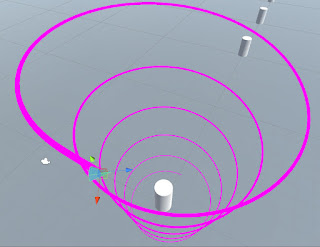 (The answer, by the way, is that you go careening into the air. Don't worry though - jumping will reset your movement pretty reliably).

I can tell when I'm really into the game I'm making when I find myself spending a lot of time taking screenshots of it, and I took a lot of screenshots of Missle Tow. I also spent a lot of time getting the character and the missiles to feel just right (and I didn't even quite get it where I want, either), and I really like the way the two movement systems interact. The player makes super sharp turns, and the missiles can turn on a dime too, but their movement is way more fluid. Makes for some pretty screenshots: 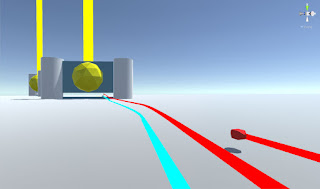 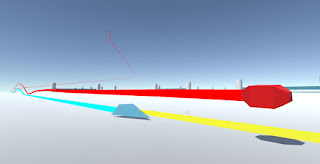 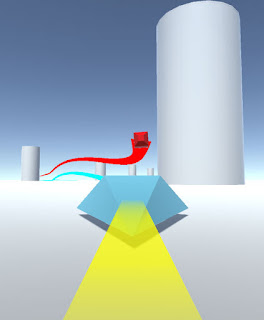 I really pushed for there to be fun ways to interact with the missiles. Getting chased by them was only so engaging, and I always knew I wanted to emulate that moment in movies when the ace pilot shakes the heat-seeking missiles by fooling them into a wall or canyonside... or into the enemy's face. So I always knew that I was going to be having the players bring the missiles to goal-zones. The hurdle-barriers came along when I realized it was really fun to be able to jump through narrow gaps with the missles right behind you. 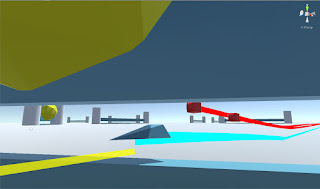 Actually, I lied in that earlier paragraph (Blogs written at 2:30am tend to become a bit unhinged), my very first idea for Missile Tow was that you would just be this arrow that can turn at high speeds, but only by jumping. I really wanted that dichotomy of movement, where you get someting for giving up something else. In this case, you give up maneuverability for speed, and you need to time your jumps for just when you need to turn, so there was a nice little game there too. That's the system at the heart of Missle Tow, and I figured the rest out from there once I saw how it was actually working in Unity. 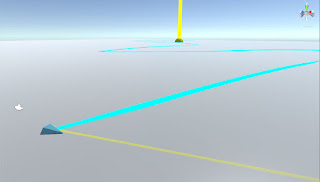 Speaking of Unity, you might notice that I've finally moved into Unity 5.1 for these game-a-weeks. And that represented its own hurdles. For one thing, you may notice a little development console appear on your screen when you destroy the goals. This apparently only appears for people who have the Unity editor installed on their machines, and there's also apparently nothing I can do to disable it. I may have that wrong. I did the research at 2:00am.


Menu music by CynicMusic. Level music by JobroMedia. Both songs used under this license.

P.S. I swear that that saxophone track seemed like the most fitting music I had while I was making this. I apologize for any bleeding ears.
Posted by Unknown at 12:47 AM No comments:

There's something interesting that Mark Rosewater mentioned in his podcast about things every game needs (or maybe it was his podcast on designing for emotions, I can't remember). He said that a common pitfall of junior designers is to build a game which is interesting, but not fun. Maybe the mechanics work together in an novel way, but the player isn't necessarily being engaged on a deeper, emotional level. 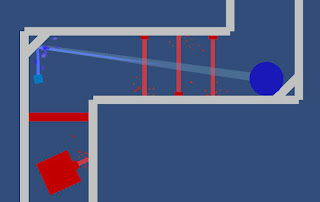 Catch and Release, and a lot of the games here, fall into that category, I think. Now, of course it's going to be difficult to emotionally engage someone when you're dealing with just rough primitive shapes and audio you've found online, but that doesn't make it impossible. I think both Shoot the Moons and Bolt had an aesthetic appeal which engaged a certain emotion.

In Catch and Release, I tried to polish up the experimental design I submitted here two weeks ago. I only made three levels, but I think I got the mechanics working the way that I wanted them to work. What I wanted to find out was how much design space would there be if you took this idea and turned it into a AAA production. My verdict is I'd still love to make this into a larger game. A thief in a medieval fantasy setting would be a great basic concept to spring from, and adding a third dimension and a second dagger really increases the applications of the teleportation gameplay.

Something you can do in this game is drop a dagger to block the beam of a laser, which isn't something I had though of doing initially. Having incentive to leave a dagger behind really makes later parts of the level very interesting. At any point, you can teleport back to the dagger, so it makes traversal and backtracking kind of... cool? You can also choose to bring your dagger back to you at any time, but imagine what happens if the player maybe sticks the dagger into some sort of keyhole, or into the gears of a mechanism or magical contraption. The dagger has to stay put, or whatever trap or machine it's activating/deactivating will be free to do its thing. Might be an interesting way to present the player with risk. One one hand, you could complete the rest of this level with only one dagger. On the other hand, if you bring the second dagger to you, the machine that spits out golems will come to life, or the drawbridge separating you from the palace guard will fall, or the trap that fills this tomb with sand will activate... 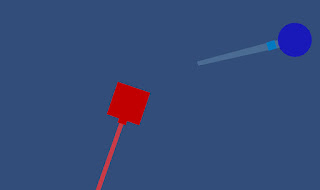 Something which worries me about this concept is how much of your brain gets dedicated to tracking flying objects. It's already a little confusing to do a rapid thow-teleport-throw. Imagine how disorienting it gets when there's two daggers you have to be mindful of. Maybe you should only be able to teleport to a dagger if it's been dropped, or if it's stuck in a wall. Mid-air daggers are off-limits. 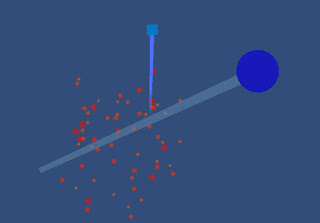 Anyway, being able to chuck a blue dot behind an enemy, teleport to that dot, then slay the enemy with that blue dot, is the central idea of this mechanic, and (as you can see from these last four lovely pictures) you can do that in Catch and Release. Play it here!

Menu Music by CynicMusic, Game Music by Kerri Coombs, and switch sound effect by Nenad Simic, all used under this license.
Posted by Unknown at 6:20 PM No comments:

Whoa! I'm really late on this week's game! It's already Monday, and I've got nothing to show! That's very un-like me - what's the deal?

Well, I knew in advance that I would be busy this weekend (and some of the days leading up to it) attending a wedding! So I decided that I won't be making a game for this week, but will deliver on-time for next week. Sorry!
Posted by Unknown at 7:37 PM No comments:

An Experiment in Throwing Magic Darts

So, this week's submission is another prototype... not a proper full game. I can't tell if I'm slowing down, trying to do too-large projects, or not managing my time well enough. Probably all three, to some degree. Anyway, I'm hopeful that, like the last experiment, this week's submission turns into one of the more unique games I make in this blog. 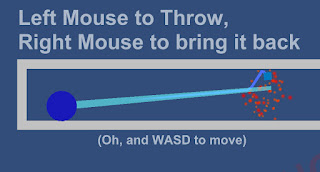 This game is building off of an idea I have for a much larger game: In a fantasy setting, the player controls a thief in possession of two magic daggers. The daggers can teleport the thief to their position, and the daggers can also teleport back to the thief's hands. The thief can drop and throw his daggers in addition to using them to fight enemies. 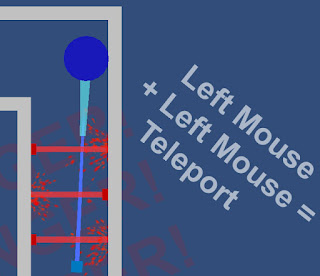 This creates a lot of interesting combat and traversal puzzles. When fighting a heavily armed enemy, I can drop a dagger, circle my foe until the dagger is behind him, then teleport behind the enemy and attack. When scaling a wall, I can throw one dagger so that it embeds itself in a wooden surface, then teleport up to that dagger, cling to it, and throw the second dagger over the wall. 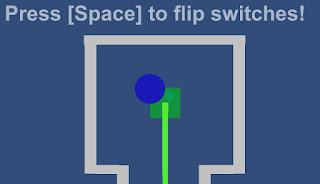 I consider that game a distant fantasy, but maybe I can make a sort of minimized proof of concept here on this blog. Anyway, if you're interested in seeing the prototype, it's right here.

Background music by Kerri Coombs, Switch sound effect by Nenad Simic, both under this license.
Posted by Unknown at 8:07 PM No comments: